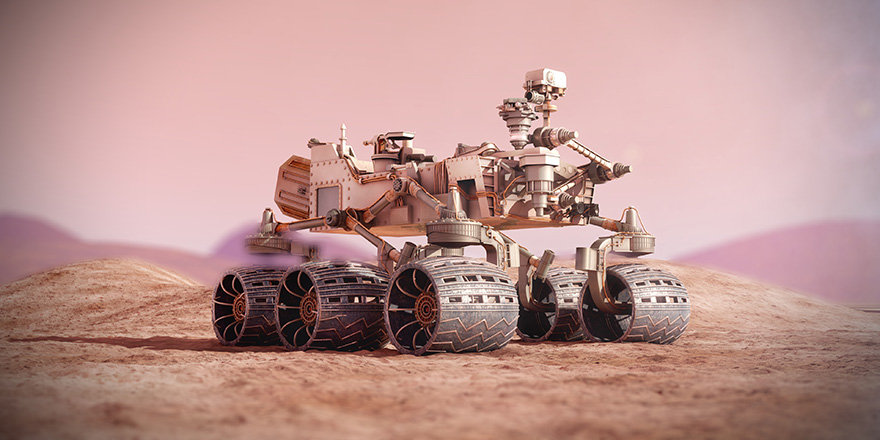 When we talk about high performance computing (HPC), what we usually mean is the physical power of the technology—more speed, more bandwidth. more capacity. But sometimes the “high performance” isn’t about raw horsepower. “Computing on the edge” can call for ingenuity and software to overcome the lack of physical capacity and still accomplish amazing things.

That’s the case 250 million miles from here, where every decision counts and unmanned Mars rovers don’t have the luxury of huge onboard processing capabilities. SC19’s keynote speaker, Dr. Steven Squyres, knows something about this.

Succeeding Within the Unpredictable

He and his NASA teammates, who led the Spirit and Opportunity programs from 2004 through 2018, learned that solving tough challenges was often an exercise in recognizing computational limitations head-on, then getting the job done. On Earth, massive computing power helped design the vehicles and plan their trajectories. On Mars, there were limits to the equipment on-board the craft, distance and bandwidth limits on the ability to relay live data, and a host of hazards they had no way to predict. The X-factor was creative thinking.

When Mars vehicles used air bags to bounce safely to the surface, how could they compute horizontal velocity without radar? As the rovers degraded in the harsh environment, what was the role of software upgrades in keeping them mission-capable? What did videos of Martian “dust devils” teach operators about keeping the rovers’ solar panels clean? How could imagery of terrain features help the rovers rescue themselves from being stuck in the sand, and what lessons from Mars may one day come home in the design of autonomous vehicles?

Dr. Squyres, the former James A. Weeks Professor of Physical Sciences at Cornell University, also took part in NASA’s Voyager mission to Jupiter and Saturn, the Magellan mission to Venus, the Cassini mission to Saturn, and the Near Earth Asteroid Rendezvous mission. He contributed to other Mars-related projects as a co-investigator, and has researched the prospect of a habitable liquid water ocean on the Jovian moon Europa. He is a former chair of both the NASA Advisory Council and the NASA Space Science Advisory Committee, and led the most recent planetary decadal survey for the National Research Council.

According to Dr. Squyres, working on the Mars programs has enhanced his respect for the engineers and astronauts who used even more limited computing equipment to bring home the accomplishments of the Apollo program a half-century ago. As humans plan a return to the moon, the lessons the Mars rover team learned may help give the next generation of human explorers a smoother ride.

Dr. Steven Squyres will deliver the SC19 keynote address, “Exploring the Solar System with the Power of Technology,” on Tuesday, November 19, 2019 at 8:30 am in the Mile High Ballroom. All registered SC19 attendees and exhibitors are welcome to attend.